Stepping Stones in the Sky 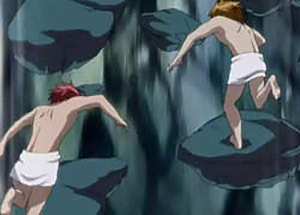 A version of Colossus Climb controlled by the Rule of Cool. A character somehow jumps and runs along a rain of falling debris or projectiles — none of which are actually attached to anything — not only to dodge but to gain altitude, sometimes to reach the area firing the things in the first place. A very good way to show off both a character's agility and their speed.

A common variation of this seen in Platform Games is having to climb a waterfall by jumping on logs which are cascading down.

Due to Newton's Third Law of Motion, this isn't actually impossible, but you do need to be moving faster than you're falling to actually get anywhere, and whatever you're climbing must have enough mass to be worth pushing against. It becomes much more plausible if...

Not to be confused with Floating Continents. See also Improvised Platform and Lily-Pad Platform.