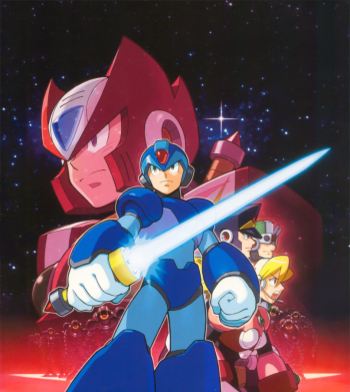 "Thanks to the Space Colony incident, a lot of Reploids were lost. Now I can easily control the Reploids remaining...It's the ideal time to build my world! I won't let anybody interfere. Finally I can realize my "dream"! I will build the strongest nation!"
— Gate, Mega Man X6.
Advertisement:

Mega Man X6 is the sixth entry in the Mega Man X series, released for the PlayStation in November 29, 2001 in Japan. This was released soon after in North America in December 4, 2001. Europe received it on February 8th, 2002.

Three weeks have passed since the fall of the space colony Eurasia - the Earth is severely damaged and Zero is still missing, presumed dead. Humans hide underground, while the Reploids are busy terraforming the land to make it inhabitable again. X remains the Maverick Hunters' star on the front lines.

While on a mission around the Eurasia crash site, X encounters a powerful investigator Reploid named High Max and some sort of illusion of Zero. He then learns from an announcement by a scientist named Isoc that the "Nightmare Phenomenon" has appeared all over the world, causing Reploids to experience hallucinations and potentially destroy themselves. Isoc blames this Nightmare on the "ghost of Zero", enraging X.

With the Nightmare under investigation by Isoc and High Max's team of "Nightmare Investigators", X becomes determined to discover how the situation is connected to Zero and begins seeking out said Investigators. He finds that they react to him with violence, and he soon discovers that a mad Reploid scientist named Gate is behind the chaos. It also turns out that Zero himself is secretly alive and well, and reunites with X to help stop Gate's plans.

The core gimmick of the game is the "Nightmare Phenomenon", things that appear in the affected places that serve as obstacles in the game. Defeating a boss can cause additional phenomenon related to said boss to appear in a few other levels. Alongside them are the "Nightmare Virus", DNA-shaped enemies that fly around and can be destroyed for their floating Nightmare Souls; bosses will also drop a large amount of these. Collect them to increase your rank; your rank determines the enhancement parts you can equip. The enhancement parts are acquired from the rescuable Reploids in the stages, i.e the same Reploids that tried to help with the investigation. Some you can find easily, others you have to search for nook and cranny...and quickly, because a nearby Nightmare Virus may attempt to corrupt the Reploids, turning them into a "zombie" version of themselves, making them beyond saving.

The Nightmare Investigators are: