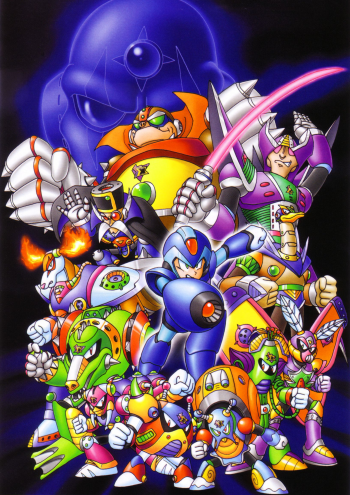 "X and the rest of the Hunters have tracked the last of the Mavericks to an abandoned Reploid factory. There they hope to wipe out the last of the resistance. Little do they suspect that real war is about to begin..."
— Mega Man X2 opening narration.
Advertisement:

Mega Man X2 is the second entry in the Mega Man X series, released on the Super Nintendo Entertainment System on December 16, 1994 in Japan, January 1995 in North America, and October 1995 in Europe.

In the year 21XX, set six months after the events of the first game, X has taken over as the leader of Maverick Hunters following Zero's death. Zero's body is missing, and all they have is his control chip.

Sigma has been destroyed, but the remnants of his rebellion are slowly rebuilding their forces. X spearheads a crusade to root them out, discovering a large group of Mavericks in an abandoned factory. Under X's orders, the Maverick Hunters travel to the area to destroy them.

Shortly afterward, however, the X-Hunters - a trio of Mavericks named Serges, Violen, and Agile - reveal themselves, unleashing a brand new group of powerful Mavericks. They also claim to hold the three pieces of Zero's body, and challenge X to duels over his control chip. Thus begins a war to get a chance at reconstructing X's dear friend. However, X will also discover a dark secret about the nature of Sigma, and that his influence may be more difficult to neutralize than it seems.