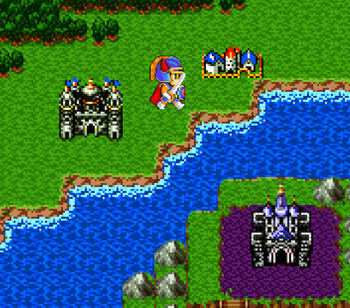 In video games, the player might take it for granted that the last area, level or world will be a remote, inaccessible place that won't be available until the end of the game when the stakes are at their highest and there's nowhere else left to go. After all, only such a climactic stage in the campaign could be worthy of this level's magnitude. Sometimes, however, the player gets to pay an early visit to the future site of their final confrontation.

This trope can manifest itself in several variants. The first visit may be treated as a dungeon in of itself with its navigation, enemies and available items differing from the final trek. It may just be a bare-bones version of the dungeon with little to offer in terms of exploration or treasures, with only the scenery and architecture (and perhaps the game's interface) foreshadowing the complete dungeon. Maybe only a tiny part of the dungeon is accessible, tantalising the player with a glimpse of what the rest of the level has to offer.

If it is made clear early in the game that the dungeon will be the final one, the preview can serve to make the player curious to explore the full place, increasing their sense of anticipation or foreboding for the endgame. On the other hand, keeping the last level as a mystery can surprise the player once they reach it and realise that they have been there before.

Sister Trope to Final Boss Preview, where one is given an early taste of an antagonist rather than a location. Compare New World Tease, Remixed Level, Where It All Began, and So Near, Yet So Far. Compare and contrast Disc-One Final Dungeon, where a level appears to be the final one only for the player to discover that the game is not yet complete; overlap between the two tropes is possible, however, as the player may initially visit the dungeon at a critical point in the middle of the game and later return for the true finale. Contrast All The Worlds Are a Stage, where the final level takes elements from earlier, different ones.

Note that at least part of the final level must be physically accessible to the player before the endgame for it to qualify as a Final Dungeon Preview; if the dungeon's exterior is simply observable from a separate area with no indication of what it contains, or if the dungeon appears only in a cutscene from which the player character is absent, then it does not count as this trope.

This trope does not include final levels which can only be reached early by exploiting glitches; the level must be reachable through legitimate means.

Due to the nature of this trope, beware of unmarked spoilers.