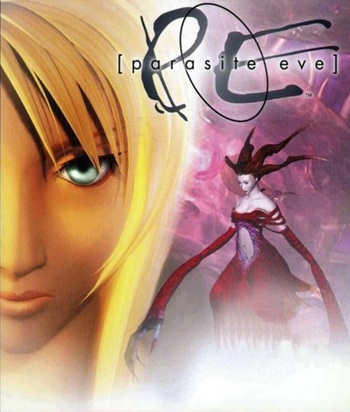 One of them is a police officer. The other is an ancient evil threatening all life on Earth. The horrifying bond between them will continue until something dies.
Advertisement:

In 1998, Squaresoft released a video game called Parasite Eve, a pseudo-sequel to the 1995 Sci-Fi Horror novel of the same name by Hideaki Sena. It was unique among RPGs available at the time because of its blend of RPG, Action-Adventure and the then- new Survival Horror genre.

The story revolves around Aya Brea, a New York City police officer whose mother and sister were killed in a car accident when she was a child. While Aya is attending an opera performed at Carnegie Hall on Christmas Eve in 1997, all hell breaks loose when both the actors and the audience burst into flames. The only survivors are Aya, her date (who runs away never to be seen again after the fire), and the lead actress, Melissa, who just so happens to be harboring a primordial horror inside her body known as Mitochondria Eve.

Aya discovers that contact with Melissa/Eve has granted her strange powers, called "Parasite Energy", and so she teams up with Daniel Dollis (her partner) and Kunihiko Maeda (a Japanese scientist and Mr. Exposition for the novel's events) to figure out Eve's motives and stop the strange mutations sweeping across Manhattan.

The game has two sequels, Parasite Eve 2 and The 3rd Birthday. The series is also available on the PlayStation Network. There is also a Drinking Game available for this game.