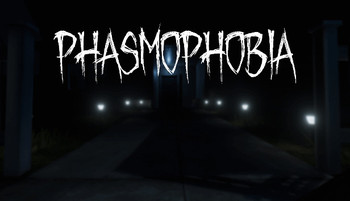 "Give us a sign..."
Phasmophobia is a cooperative horror game released on September 18th, 2020 by Kinetic Games. Paranormal activity is on the rise and it’s up to you and your team to use a wide variety of ghost hunting equipment (high tech items like cameras and sensors alongside more traditional methods like ghostwriting and salt) at your disposal in order to gather as much evidence as you can, as a "vanguard" team ahead of the exorcism team to identify what exactly they are up against.
Advertisement:

The game is notable for having players use their own microphones to communicate to both to their teammates and to the ghost itself as well as making use of several ghost hunting tools to identify the entity through physical evidence and behavioral patterns. There is no scripting, and no two ghosthunts will go the exact same way. The game takes many inspirations from real life Paranormal Investigation television shows like the USA's Ghost Hunters and the UK's Ghost Hunting with..., although it should be noted that the ghosthunters in this case can very easily become the hunted.

The game is available on Steam as an Early Access title.