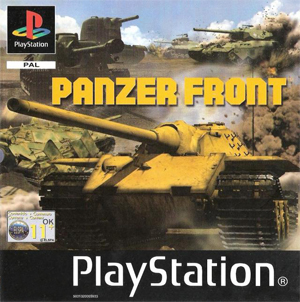 Panzer Front was an old PlayStation and Sega Dreamcast (the Dreamcast version was No Export for You) game released way back in 2000; it is not a particularly well known game but some of the lucky few who have played it will remember it very well. The game revolves around the tank battles in Europe, from Kursk to the last days of Nazi Germany in 1945. And unlike most dumbed down Tank games these days, most of it was depicted realistically and utilized every last ounce of power the PSX had back then to produce one of the best looking games of it's time.

As the Title suggests it's Exactly What It Says on the Tin, this was a realistic tank simulator where you were entrusted with the role of a tank commander; that tank could be anything from a Stuart Light Tank to a Tiger II...

A Japan-only Updated Re-release, Panzer Front bis, was released in 2001. It adds a mission editor, voice acting, and a... weird story mode focusing on a German tank crew.

In addition, a sequel, Panzer Front Ausf. B was released for the PlayStation 2 in 2004. It focused on the North African front in 1941 and briefly, the German invasion of France in 1940.

This game has examples of...