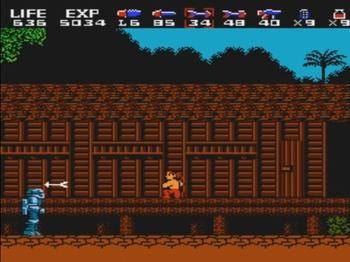 Remember your Grandpa's war stories about the killer robots?
Rambo is the title of multiple console and arcade games, over the years, with the most famous being a 1988note 1987 in Japan action-adventure game for the NES. Adapted from Rambo: First Blood Part II, it featured gameplay similar to that of Zelda II: The Adventure of Link: Experience points, levels, side scrolling exploration, dark maps requiring a light source, similar default weapons, and so on. Due the Zelda II's protracted localization timeframe, however, Rambo ended up introducing that style of gameplay to North America.
Advertisement:

The game is known for being pretty faithful to the actual storyline, barring the numerous encounters with wild animals and their fantasy "giant" boss varieties, along with androids near the end. It also has a rudimentary amount of player choice, allowing the player to get a better ending than the movie.

Tropes in the Nintendo Entertainment System version include: