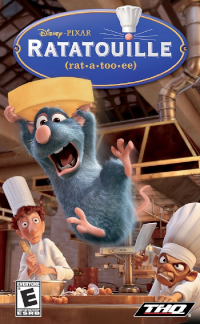 The video game adaptation of the award-winning Pixar animated film, released alongside it on all major platforms in 2007. It follows the plot of the film more closely than most films, focusing on Rémy’s interaction with the clan and his reluctant assistance in their food heists, which happen either just before crucial events (the theft of Gusteau’s food waste just before Rémy was found by Linguini) or during the film’s time skips (the theft from the Parisian grocery market, implied to happen sometime after Linguini became head of the restaurant.) It had reasonable sales and reviews, with most agreeing it averted The Problem with Licensed Games and was OK on the whole.