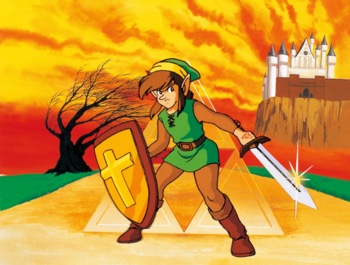 The Hyrule fantasy continues...
after ganon was destroyed,impa told link a sleepingspell was cast on princesszelda. she will wake onlywith the power of thirdtriforce sealed in a palacein hyrule. to break theseal,crystals must beplaced in statues in 6well guarded palaces.link set out on his mostadventuresome quest yet...©1987 nintendo
Advertisement:

Zelda II: The Adventure of Link (Link no Bouken in Japanese) is the second game in The Legend of Zelda series, released for the Famicom Disk System on January 14, 1987 in its home country of Japan and the NES just under two years later, on December 1, 1988 for North America (though Europe got it a couple of months earlier in September 1988). Unlike many other Disk System games, a cartridge version was never released for Japan.

Zelda II is most notable for completely overhauling the gameplay of its predecessor. The game utilizes side-scrolling action more akin to a Metroidvania instead of being top-down and makes heavy use of RPG Elements, such as an experience-based leveling system, magic and health points, and random encounters. The game also has deeper story elements with a more complex world, including towns filled with characters.

The story has two threads. Many years after his defeat of Ganon, Link sets out to claim the third piece of the Triforce: the Triforce of Courage. Doing so will awaken Princess Zelda (not the same one from the original) from her sleeping curse. Meanwhile, Ganon's followers are trying to resurrect him, and the only way to do that is with the blood of the hero who felled him. Thus, there are a ton of enemies standing in Link's way as he attempts to deposit six crystals in the palaces throughout Hyrule and open the path to the Great Palace, where the Triforce of Courage is kept...

While the side-scrolling gameplay style would not be revisited outside of small segments of The Legend of Zelda: Link's Awakening and The Legend of Zelda: Oracle Games (and if one counts them, two of the infamous CD-i games, Link: The Faces of Evil and Zelda: The Wand of Gamelon), and the RPG elements would be largely eschewed in the future, Zelda II definitely left its mark on the franchise. Towns filled with NPCs and sidequests would become staples of the series, and a magic system is used in many games. The Triforce of Courage being associated with Link also originates with this game.

According to Hyrule Historia, this is the last game in the "Hero Defeated" timeline.

The game has been readily available for much of its lifetime: it was ported to the GameCube in The Legend of Zelda Collector's Edition, the Game Boy Advance as part of the NES Classic series, has been released on every iteration of the Virtual Console, and is available to play within the Nintendo Entertainment System — Nintendo Switch Online service. Additionally, it was announced on June 15th, 2021 that a special version of the

Game & Watch system containing this game, its predecessor, The Legend of Zelda: Link's Awakening, and a Zelda-themed version of the Game & Watch game Vermin would be released to commemorate the series' 35th anniversary, which came to fruition in November of 2021. This release also contains the European and original Japanese versions of all three games.

open/close all folders
A-K
L-Z
IF ALL ELSE FAILS USE FIRE.