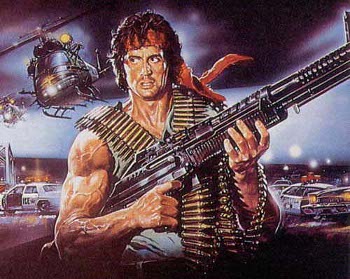 "You're always going to be tearing away at yourself until you come to terms with what you are. Until you come full circle."
— Col. Trautman
Advertisement:

A series of action/drama films starring Sylvester Stallone as emotionally troubled Vietnam War veteran John Rambo, who was a former member of the United States Army Special Forces, a Green Beret, and a recipient of the Medal of Honor. First Blood, released in 1982 and the first film in the series, was based on the 1972 David Morrell novel of the same name. The character and franchise became very famous and a verbal shorthand to describe a One-Man Army type of badass.

Prior to Rambo, however, a cute and heartwarming spin-off of sorts was created in 2008 by British director Garth Jennings called Son of Rambow. The film details the misadventures of two boys in 1982 who tried to remake First Blood with a bulky VHS-Camera and the vibrant imagination of ten year olds. Sylvester Stallone himself is said to have loved the film.

Both the films and the character have enjoyed massive success and popularity, and - alongside the Rocky series - catapulted Stallone to the position of a major action hero and film star. After the release of the first three Rambo films, Morrell went on to write the novelizations of the first two Rambo sequels because he wanted to include characterization that he felt wasn't in said sequels. There was also a 1986 animated TV series called Rambo: The Force of Freedom that lasted 65 episodes and spawned a line of toys; a few comic books starring the character; soundtrack albums for all the films (but not the animated series, which mainly tracked in Jerry Goldsmith's score for the second one); and many video games including the NES version of ''Rambo'' and the Sega Master System versions of Rambo: First Blood Part II (a dolled-up version of a Japanese title, Ashura, that was an In Name Only installment, but did contain an impressive chiptune rendition of the "First Blood" theme that played over its title screen) and Rambo III. Sega also released an arcade light gun "Rambo" game back in 2008, and it is perhaps a distillation of what makes the Rambo franchise awesome, though, bizarrely, had a rap soundtrack. There was also Rambo: The Video Game, a rail shooter based on the first 3 movies of the series. It was released on the PC, Xbox 360, and the Playstation 3 in February 2014. A trailer can be seen here

. In October 2020, Rambo was announced to become a downloadable Guest Fighter in Mortal Kombat 11.

Rambo works with their own pages:

open/close all folders
The five movies:
Across Other Media
Advertisement: