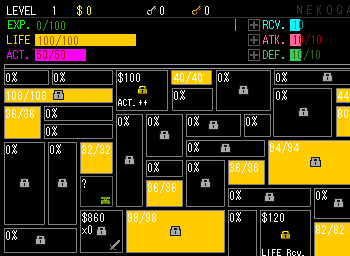 The starting parts of the game grid.
Advertisement:

is a Japanese RPG Web Game with no proper graphics, no sound effects, no music and no story. Essentially, it is an RPG stripped down to its basic mechanics-click on boxes to fight enemies and complete missions, while upgrading your stats, unlocking rooms which contain missions or monsters, and such. Your objective is to "kill" all the enemies (yellow squares) and defeat the final boss.

Despite its extreme simplicity, this game is very addictive.

Unfortunately, as of Flash's end of life, it's no longer playable on its original site.