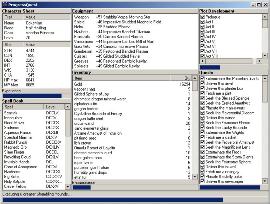 It's just as fun as it looks!
Advertisement:

is a parody of RPGs. No actual user input is required once the game is started. Combat takes a set length of time and the rest of the game is based around this. It takes X fights to complete a quest. You need to complete Y quests to gain Z experience to reach the next level. Quests, loot, monsters and spells are randomly generated from set lists.

Players can form guilds and set a motto. Along with a few aesthetic selections for the player character, that is all the customization available.

This features examples of: