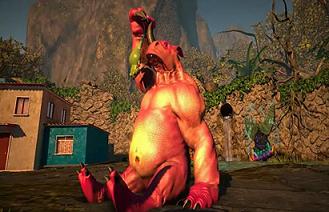 He might look cute now, but he's called Monster for a reason.
Advertisement:

Papo & Yo (which essentially means Father and Me, in the game's composite language of several languages spoken in Latin America) is a platforming-based adventure game for the Play Station Network, released in August of 2012. This game is very heavy on allegory, as it is meant to be a direct parallel to the experiences of creator Vander Caballero.

You play as Quico, a young boy who escapes into a fantasy dream world where he can bend architecture to his will. With the help of a mysterious girl named Alejandra and a doll-Robot Buddy named Lula, Quico traverses the landscapes of his mind. He must also take care of Monster, a seemingly lovable and docile creature who turns exceptionally nasty once he gets his hands on some frogs.

Upon its release, the game was praised for its beautiful worlds, gripping story and interesting gameplay ideas, but was criticized for its glaring technical issues and spotty controls. Regardless, the game has seen a following as a Cult Classic, with fans able to put aside the rougher edges and enjoy the game for what it is.

A more detailed plot analysis can be found here

, as well as an essay on its design

(in case it isn't obvious, both articles are full to the brim with massive spoilers. Unless you're into that sort of thing).

Papo & Yo provides examples of: