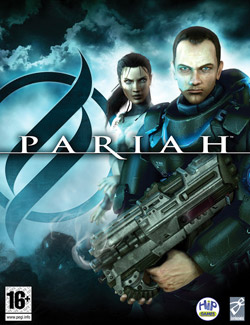 Pariah is a First-Person Shooter developed by Digital Extremes, co-developers of the Unreal series. It was released by Groove Games on May 3, 2005 for PC and Xbox. A PlayStation 2 version was planned but never materialized. It used a modified version of the Unreal 2 Engine and the Havok physics engine.

It is the year 2520. Thirty years ago, the human Alliance fought a war against a sinister and mysterious foe, the Shroud. We won, though in the process, a large portion of the Earth's surface was turned into harsh wastelands: "The Zone." Most of humanity now lives in off-world colonies.

You play the role of Jack Mason, a medic in the Alliance military who's been demoted numerous times for insubordination and now gets stuck with all the crappy jobs. In this case, he's supposed to transport a woman named Karina off-world from a high-security prison called The Anvil. She's carrying a highly-classified transgenic virus that gives her bizarre and destructive powers.

Only on his way out, his ship gets shot down by The Scavengers, the inhabitants of the outlaw Zone. Karina is released from her stasis cell in the crash and runs off, leaving the player to go chase after her, which is where the game begins.

The game recieved mixed reviews and despite a small, dedicated fanbase pushing for the game to go pro, the Competitive Multiplayer never took off. A sequel was in development, though because Pariah was such a flop, the sequel became Warpath, an unrelated (story-wise) game that retained this iteration's few good elements: namely, the weapon upgrade system.