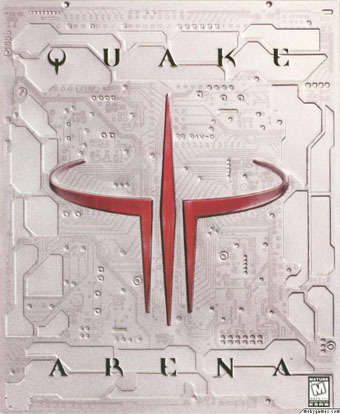 Welcome to Quake III: Arena.
"Untold centuries ago the Vadrigar, the mysterious Arena Masters, constructed the Arena Eternal for their own infernal amusement. Virtually nothing is known of these beings except that they savor the carnage and clamor of battle. As such, they have stocked the arena with the greatest warriors of all time. And you have just joined their ranks."
From the manual.
Advertisement:

Quake III: Arena is the third entry in the Quake series. It was developed by id Software and released for PC in 1999.

The plot of the game is simple: Several warriors from all the corners of the galaxy duke it out in order to entertain the Vadrigar, and win the honor of being the most badass warrior of all time. Characters from several of Id's games, such as Doom and the two previous Quake games, were present in it.

This game was designed almost exclusively with multiplayer mode in mind. Id had recognized the fact that the deathmatches were easily the most popular thing about Quake so far, and created this entry as a virtual arena for competitive online matches. The single-player mode contained only a very basic story, and was based around a series of tiers, with the player making its way to the final match against the Champion. As everything else, the available multiplayer modes included in the game were plain and simple: "Free For All" (regular Deathmatch), "Team Deathmatch", "Tournament" (also called "1on1") and Capture the Flag.

The game has an Expansion Pack in the form of Quake III: Team Arena, made by id themselves, which was focused on team games. Here you must choose a team and duke it out with the other clans. It adds three new gamemodes, all of them team-based: "One Flag CTF", "Harvester" and "Overload".

Like most PC games, it also has console versions. The first release was for the Sega Dreamcast in 2000, ported by Raster Software and published by Sega, and featured 4 player online crossplay versus Dreamcast and PC gamers. The second is called Quake III: Revolution, and was released for the PlayStation 2 in 2001, created by Bullfrog Productions and published by Electronic Arts; this version features several elements (maps and characters) adopted from Team Arena, along with a more mission-based single-player mode, and split-screen multiplayer for up to 4 players (sadly, it lacks mouse support and online play due to the PS2's network adapter not being released outside of Japan until 2004). And finally there's a Xbox Live Arcade version called Quake Arena Arcade, a joint-effort by Id and Pi Studios released in December 15, 2010. This game contains some new maps and characters.

All of this, of course, not counting the countless of ports and forks which have spawned ever since Id released the source code in 2005, which allowed Q3A to be played in virtually every device in existence, as well as spawning many clones and derivated games such as Alien Arena, OpenArena and World Of Padman, as well as former game mods turned standalone games such as Q 3 Rally and Urban Terror.

, which also added many new maps (especially third-party ones) and some extra game modes. This version was later released on Steam in 2014, and made as a paid game in 2015. Plenty of new modes were added since its announcement such as "Race", "Clan Arena", "Freeze Tag" (a Lighter and Softer version of Clan Arena), "Domination", "Attack & Defend" and "Red Rover". Instagib versions of FFA, CTF and Freeze Tag were also made available.

Followed chronologically by Quake IV. In 2016, it received a direct successor as Quake Champions.

Open the folders to begin reading! Prepare to read the games' examples of: