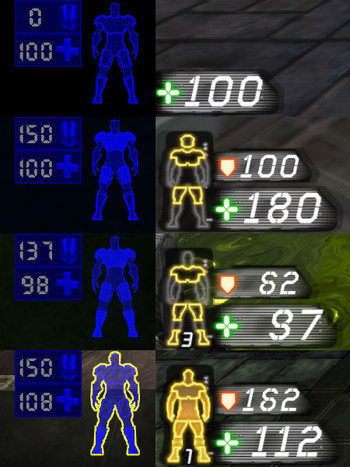 In video games, usually in the HUD, this trope is a number that represents your armor's durability, i.e how much damage it can take before it breaks and stops protecting you. Can also be done with shields, whether traditional ones or force field ones. This often appears alongside the Life Meter and/or Hit Points.

Like in Hit Points's case, the armor's capability of protecting you (usually by shaving off some percentage of damage you took) is usually subject to Critical Existence Failure (meaning that it won't suffer any reduction in effectiveness even as it nearly breaks).

Regenerating Shield, Static Health is when the armor/shield can regenerate, like Regenerating Health for Hit Points, to protect your actual hitpoints which don't regenerate on their own. Anti-Armor attacks may damage this gauge more than any other attacks would (unlike Armor-Piercing Attack, which would ignore the points or only damage it lightly while dealing direct damage to your HP). Mana Shield is when your Mana Meter temporarily becomes Armor Meter as damage you take instead burns your mana.

Body Armor as Hit Points is not this trope; that is when armor directly serves as extra HP, not a Damage Reduction mechanic.

Note that a Sub-Trope of this is Single-Use Shield, where a defensive object is treated like a One-Hit-Point Wonder, but can take any amount of damage, so long as that damage is dealt as a single hit.