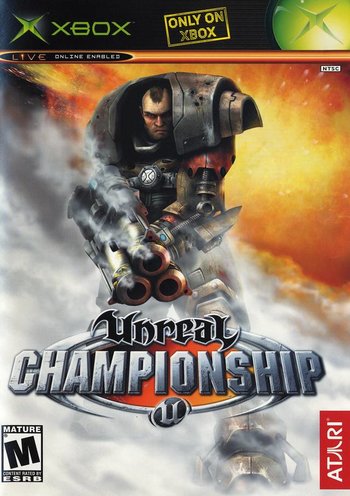 "Now that the tournaments have become a fixture of the Empire's power, the aristocracy has begun to take part as well, in carefully orchestrated battles that pose no real danger to their lives. Unlike their prisoners, these Highborn can not use the resurrection technology so readily available, without losing their status as ones tainted by madness. To kill a Highborn is to kill him forever. The only hope for mankind is that a champion will rise from the ashes of their civilization and succeed against all odds to hold the Emperor's life in their hands."
Game synopsisnote Full quote in the Quotes page.
Advertisement:

Unreal Championship is a multiplayer-based First-Person Shooter videogame co-developed by Epic Games and Digital Extremes, released in 2002 for the Xbox.

The game was developed in great part by the latter dev house, alongside Unreal II: The Awakening (which was being developed by Legend Entertainment) and Unreal Tournament 2003 (which was developed mostly by Epic Games, with a little help from DE). Chronologically, it was released between these two games, releasing in November 2002 (following 2003's release that September and being followed by Unreal II in February 2003); in fact, it's frequently assumed either 2003 is a PC port of Championship or Championship is an Xbox port of 2003, despite the noticeably different story between the two and each having exclusive content.

Championship takes place in an alternate universe where, over a century after the Tournament's founding, humanity was enslaved by an alien race called the Overseers. Initially, they dismissed the Tournament as irrelevant, but once they saw the benefits that could be derived from it, they reinstated the Tournament as a form of punishment for the most vocal and violent resistors, with promises of a reward for whoever manages to win.

Due to the low reception of the three games, this game's storyline was discontinued and the next Championship game was built from the ground up and tailored for the console.