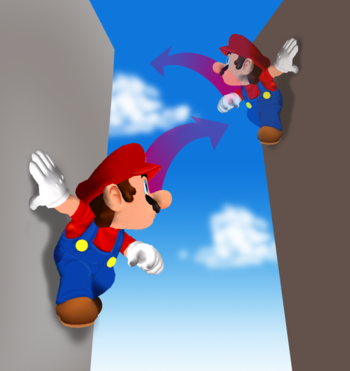 Mario, driving himself up the wall.
Advertisement:

In real life, if you throw yourself at a wall hard enough and spring off quickly enough, you can just about do a Wall Jump, propelling yourself even higher than your original jump. Once, sure. More if you're fit, or a Le Parkour expert like Jackie Chan.

Some Video Game Characters, however, have the speed, strength and stamina to Wall Jump all day. Give them two walls close enough together and they can wall jump repeatedly to climb up the shaft. Some need only one wall, by steering themselves back onto the wall they jumped off at a higher point, then jumping off again. Some video game characters would rather Wall Jump than use the stairs.

Also known as a "triangle jump", after the path traced during a typical Wall Jump. Part of Jump Physics. May be paired with Running on All Fours and Wall Crawl. Compare Building Swing.

The Ur Examples of this trope were the Sega Master System games Alex Kidd in Shinobi World (1990) and Ninja Gaiden (1992).

High Elf Archer chases down a goblin that assaulted a village.

High Elf Archer chases down a goblin that assaulted a village.