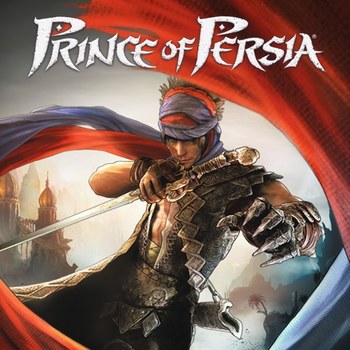 Prince of Persia is another Continuity Reboot for the action-adventure and platforming Prince of Persia series, developed by Ubisoft Montreal and published by Ubisoft. It was released in the United States on December 2, 2008 for PlayStation 3 and Xbox 360 and on December 9, 2008 for Microsoft Windows. It was later released on March 24, 2009 for Mac OS X via the Cider engine.

The game is set in ancient Persia, with the eponymous Prince as the main character, reimagined as a roguish thief. When a freak sandstorm diverts him from his course and separates him from his donkey, Farah (and the gold she's carrying), he stumbles into a canyon and runs into a woman named Elika. Elika is one of the Ahura, people tasked by the god Ormazd to keep his brother Ahriman imprisoned inside a temple. But Ormazd hasn't been heard in centuries, the land has fallen into neglect, many of the Ahura have abandoned their duties, and those that remain are disillusioned. When Elika's father breaks the seal holding Ahriman, Ahriman's corruption spreads across the land as his generals are unleashed. It's up to the Prince and Elika to purify the land and seal Ahriman back in his prison.

Players traverse many different environments using his acrobatic abilities to scale walls and even crawl on the ceilings. Throughout the journey, players combat various enemies as they attempt to cleanse the land of corruption. A notable feature of gameplay is that the Prince can never be killed. Failing at platforming will result in Elika saving the Prince, resetting you to a safe spot before your attempt, and failing at combat will cause the enemy to regain some health but otherwise the battle will continue without stopping. The game's storyline and setting borrowed several aspects from Zoroastrianism, the world's oldest monotheistic religion.

The next chapter is a downloadable expansion simply titled Epilogue, released on March 5, 2009, exclusively on consoles. A spin-off DS game, Prince of Persia: The Fallen King was released on Dec 2, 2008. Penny Arcade made a thirty-page comic

about the origin of the Hunter.

There has been no word on a true sequel to the game or any continuation of the franchise with Ubisoft mostly focusing on Assassin's Creed, Watch_Dogs, and more additions to the Far Cry series, with Ubisoft Montreal's CEO saying that the franchise was being "paused".note Altough Ubisoft has said they are considering next-gen entries into multiple franchises, including Prince of Persia.