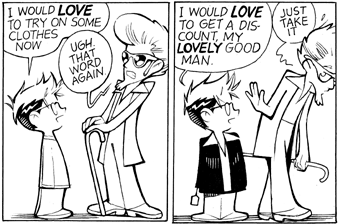 Heroes have moral standards; villains exploit that. Villains have no concept of loyalty; heroes abuse that. Sometimes, villains have standards; both heroes and worse villains can use that. Flaw Exploitation is the action of either a Hero, Villain, or even Innocent Bystander to take advantage of the inherent flaws (or to be more charitable, character) of their opponent in order to win.

This is similar to the Hero Ball and Villain Ball in that both deal with the inherent limits heroes and villains have or place on themselves, but differs in that the former deals with the two tripping themselves up, whereas Flaw Exploitation is someone else doing so. Neither the hero nor the villain needs to make mistakes for Flaw Exploitation to occur, just act in character.

A Smug Snake abusing a hero's Lawful Good morality to avoid getting punched in the face would count. Said hero being Lawful Stupid wouldn't. A villain's henchmen being talked into doing a Mook–Face Turn in the face of their bosses' policy on failure would count, but a villain doing a Revealing Cover-Up wouldn't.

Most villains will do this by snatching some completely random Innocent Bystander off the street to use as a hostage, because the hero just can't Shoot the Hostage, no matter how many million lives are at stake. Bonus points if it's a woman, a child, or for the 4X multiplier, a little girl. But if it's the Old Master...

Exploiting an opponent's character and flaws is a tactic as old as time and thus Truth in Television. There's a deeper level to this in literature. In some settings this means that evil is fundamentally flawed and incapable of long term gains, since a competent hero can use its very nature to defeat it. On the other hand, a clever villain can make a hero set for destruction because his ethical code and a Moral Dilemma are in violent opposition, creating a Tragic Hero.

It's worth noting that neither the hero or villain would see the flaws exploited as, well, flaws, but as character traits. Character traits of such importance you cease to be a Knight in Shining Armor or a stylish Card-Carrying Villain if you change them. If they do recognize them as weaknesses that can be abused, they'd all the same see them as inherent to being good/evil and necessary. If they don't, say "Hello Anti-Hero and Anti-Villain!"

When used against a hero, will often lead to a Sadistic Choice. The Manipulative Bastard finds this easy as breathing, while the Guile Hero will have to utilize this out of necessity. The Fettered is a type of character that can frequently find their self-imposed limits exploited - and by contrast, one of the reasons The Unfettered is so terrifying is that it's nearly impossible to do this to him.

Feed the Mole runs on this. Batman Gambit is based on this. Xanatos Gambit is arranged to work regardless of the mark giving in to the flaw or not. The Corrupter uses this to bring out the worst in other people. The Manipulative Bastard and The Chessmaster like to use this. Fantastic Fragility relates to magical weaknesses. See also Complexity Addiction and Fatal Flaw. Attack the Injury is a physical sister trope, where someone attacks an existing injury/flaw in order to gain an advantage.

Because Auto can only see in 2D and has no sense of depth, the captain puts up a picture of the plant and with his hand under that plant in order to trick Auto into thinking that he's holding the real plant. After that, he blends in with a picture of himself before jumping up to grab Auto.

Because Auto can only see in 2D and has no sense of depth, the captain puts up a picture of the plant and with his hand under that plant in order to trick Auto into thinking that he's holding the real plant. After that, he blends in with a picture of himself before jumping up to grab Auto.