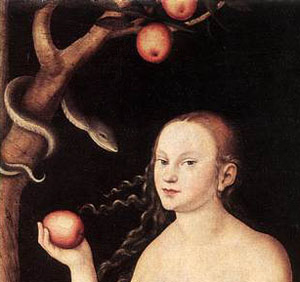 Mmmm... it does look like such a delicious apple...
This road is full of choices,
Tough decisions,
Rough mistakes.
Take the high road or the easy street.
The choice is yours to make.
— "Todrick Hall Papi

Ever since the dawn of humanity people have wrestled with their ethical dilemmas—to eat that delicious fruit despite God telling you not to, to kill someone who has threatened you, or to help someone at the possible cost of your own safety. There's no choice more eternal and more obnoxiously inescapable as the moral dilemma, and that's why it's been featured in every kind of media ever created. Even the ones that wouldn't normally apply.

The main kinds of moral dilemmas are:

Naturally, the "right" choice (if there is one) will vary depending on the tone of the work, the character in question, the morality involved, the reactions of the characters or audience, the morality of the culture, and much, much more. To say that the possibilities are endless is an understatement (even if you Take a Third Option).

Of course, that's not to say that not all those possibilities are equal. A dilemma can seem false and contrived when a character agonizes over killing the Big Bad but had no such problem killing random Mooks. Or the audience themselves might dispute the character's decision and wish they did something 'more awesome/badass'. Or the character might make a choice that's completely Out of Character to their previous characterization.

Unsurprisingly, moral dilemmas are rich with Aesops. There's always a lesson to be learned if someone makes the right choice — or makes the wrong choice and screws themselves over. There can be an Aesop to be learned just by the moral dilemma itself; obviously, someone wouldn't be torn over whether or not to cheat unless they thought cheating was okay on some level.

And since there's always a lesson to be learned, moral dilemmas are major turning points for character development. A hero character that ultimately chooses to do something immoral may shift into an Anti-Hero or go Jumping Off the Slippery Slope entirely. A villain who chooses to do the right thing can be elevated to a Noble Demon or even redeem himself — because sometimes Even Evil Has Standards.

Expect a good angel and bad angel to appear on a character's shoulders to debate the dilemma.

Moral dilemmas may also not apply to people who consider themselves above such petty things.

No examples please! Place examples in the specific moral dilemma trope itself.