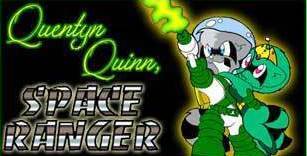 , a webcomic by Ralph Hayes, Jr. and a Spin-Off of Tales of the Questor, deals with one of Quentyn's descendants centuries down the track, IN SPACE!!
Advertisement:

A large part of the strips are based on parodying or straight-up mocking well-known Science Fiction works or tropes.

The first ones are also collected in a volume.