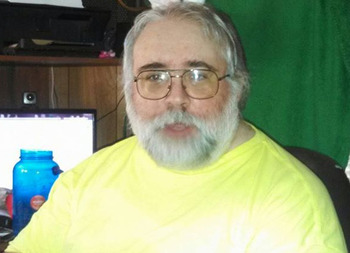 Ralph Hayes, Jr. is a writer and artist with a predilection for Funny Animals, but who works in a number of genres within the Furry Comic. He is also known for his strong and potentially controversial political opinions, although his actual strips display a varying amount of overt preachiness.

As of late 2012, he has switched to a business model where a particular strip gets an update only when he receives enough monetary donations. In 2014 he made a Patreon account and the rate of updates has increased.

He is also a brony and has an account

at Fimfiction.Net. As of January 3, 2016, he has abandoned Fimfiction and moved his stories over to his AO3

Works that have their own pages on TV Tropes: