Webcomic / Tales of the Questor 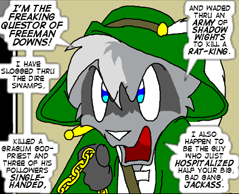 Don't piss off the Questor.
Advertisement:

Tales of the Questor

is a webcomic by one Ralph Hayes (RH) Junior.

It tells the tale of Quentyn, a young anthropomorphic raccoon (or "Rac Cona Daimh" or "Racconan" but who are we kidding?) who spends his days with adventure books and daydreams. When the traditional ritual where young kits choose their career for life approaches, young Quentyn shocks everyone and becomes the local laughing stock as he declares his desire to become a Questor - a type of noble hero-for-hire whose like hasn't been around for ages, and who are practically nothing but adventure book fluff. But, it turns out there are legal requirements to have one when someone offers. So begins Quentyn's own adventure - he's now an official Questor and it's up to him to do what a Questor must, even if it means having to face great dangers and things he's never had to encounter during his young, sheltered life — and practical exile as he's tasked with a gigantic quest that requires him to head into the lands of humans.

TotQ borders between a humoristic adventure comic and a more dramatic story about Quentyn's maturing and the problems he faces due to still being a young boy, with stronger emphasis on the serious side as it has progressed. The comic is also notable for its writer's tendency to convey his religious and political views through it, though these traits have decreased over time and transferred into other mediums. At its best, the comic works its themes into an imaginative fantasy allegory, much like C. S. Lewis' The Chronicles of Narnia novels, and it constructs a deep world that helps alleviate these problems to make Hayes' themes feel more palatable.

Pretty well on the Idealistic side of the Sliding Scale of Idealism Versus Cynicism.

The first ones are also collected in four volumes.

Has a Spin-Off comic: Quentyn Quinn, Space Ranger. Also currently ongoing is yet another arc that brings both Tales of the Questor and Quentyn Quinn Space Ranger together: The Probability Bomb.