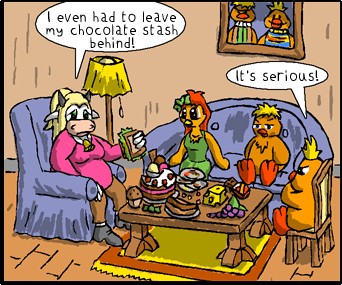 Compared to most of the comic, it very well may be.note Left to right: Hayfa, Parsley, Panschi, Lanschi.
Tails of Lanschilandia

is a Furry/Fantasy webcomic by Tammy Spahn started in 2012. It details the episodic adventures and misadventures of Lanschi the duck and his Funny Animal friends as they repeatedly try to ruin the schemes of Evil Sorcerer Big Bad Kakralomino and deal with various other villains and monsters. Inspired by Saturday Morning Cartoons, The comic is set in a semi-mediaeval Schizo Tech world which seems to run mostly on Rule of Funny with some passing moments of seriousness.
Advertisement:

The comic features relatively large pages and currently updates every Friday. There is also a B Side Comic, Dyllis Filler, that updates whenever the main one is taking a break and has a seperate plot and characters. One print edition has been released so far.

The main webcomic provides examples of: