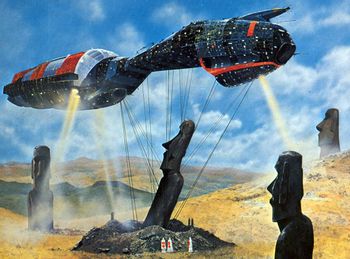 And you thought they only built the pyramids!
The Doctor: The stones. These stones are great big transmitters broadcasting a warning to everyone. Everywhere. To every time.
River: Stonehenge is transmitting. It's been transmitting for a while. So who heard?
— Doctor Who, "The Pandorica Opens"
Advertisement:

Often, the landmark is a facade for something concealed inside or beneath it — sometimes becoming an Elaborate Underground Base. Most things that offer an explanation for Area 51 as part of their plot count — but not if they just show us what's in there. It generally follows the Rule of Cool.

Will frequently overlap with Ancient Astronauts and Beethoven Was an Alien Spy, and very rarely doesn't create Alternate History, being a type of Historical In-Joke. May double-up as a Weaponized Landmark.

Compare ET Gave Us Wifi. Contrast Landmarking the Hidden Base and the Eiffel Tower Effect.

open/close all folders
Anime and Manga
Comic Books
Advertisement:
Doctor Who
Yes, Doctor Who has so many examples we had to give it its own section.
Film — Animated
Film — Live-Action
Franchises
Literature
Live-Action TV
Tabletop Games
Video Games
Web Original
Western Animation
Real Life Legends