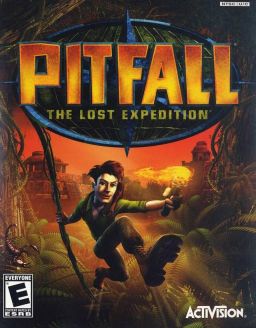 The Lost Expedition is the sixth game in the Pitfall! series and a Continuity Reboot of the first two games, marking the return of Pitfall Harry, Sr. as the main character. It was released on the PS2, Xbox, and Nintendo GameCube and later ported to the Wii as Pitfall: The Big Adventure.

It's 1935 and Pitfall Harry, the fearless, rough-and-ready treasure hunter, returns to help a beautiful archaeologist rescue her father and thwart the evil Jonathan St. Claire from claiming the lost Incan city of El Dorado, which in the game, is built upon Machu Picchu in Peru. As Harry, players encounter various animal enemies scorpions, bats, piranhas, alligators and even penguins as well as human adversaries under the leadership of the sinister St. Claire throughout your expedition in the mighty South American rainforest. Numerous abilities are at the player's disposal as Harry recovers pages of the Heroic Handbook. With his various items, Harry is equipped for almost anything. Harry will also find lost explorers and be rewarded with golden idols for his trouble, which he can then use as currency with the Shaman.