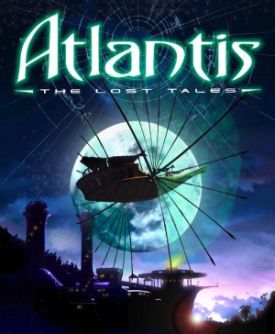 Atlantis: The Lost Tales is a fantasy adventure game from Cryo Interactive, released in 1997. The game is similar to Myst, and has four sequels: Atlantis II (Beyond Atlantis outside Europe) (1999), Atlantis III: The New World (Beyond Atlantis II) (2001), Atlantis Evolution (2004) and The Secrets of Atlantis: The Sacred Legacy (2006). The series has a flying ship as its signature vessel, at least for the first three games.
Advertisement:

The following article explains the story of the games, so watch out for SPOILERS.

Atlantis: The Lost Tales follows the story of Seth, one of the Queen's new Companions, the personal guardians of the Queen of Atlantis. He discovers after he arrives that the Queen disappeared a few days prior. It turns out a power struggle is taking place between the Queen and the Guards of the Consul. The leader of the Guards, Creon, wishes to replace the current goddess of the moon, Ammu, the most worshipped of Atlantis' gods, with Sa'at, the sun god, and ultimately wants to conquer the world in the name of Sa'at, using a new superweapon.

The weapon is revealed to be half of a crystal that is capable of granting immense knowledge to its holder. Long ago, the crystal was split into Light and Dark halves, and the halves were hidden in Easter Island and Stonehenge, respectively. Creon found the Dark Crystal, which has a side effect of driving its holder mad. Seth retrieves the Light crystal from Easter Island, then returns to Atlantis to face Creon. After Creon's defeat, the weapon he built causes a volcano on Atlantis to erupt. Seth and a few survivors are seen sailing away from Atlantis as it is destroyed by the volcano.

Atlantis II, or Beyond Atlantis, is mostly a sequel In Name Only, although Atlantis does make a short appearance in its more traditional (sunken) form. Ten, the Bearer of Light, is sent on a quest to Shambhala to confront the Bearer of Dark so that balance can be returned to the Universe. To find Shambhala, he must gather several pieces that make up the "road to Shambhala" from different locations and time periods: China, Ireland and the Yucatán Peninsula of Mexico.

You begin aboard a ship in the mountains of Tibet, which acts as a home base. As the pieces are found and put in place, Ten is mystically transported to exotic locations and will posess different characters. The different locations are based on local mythologies and have their own atmosphere.

The character in the Yucatán chapter is Tepec, a loyal follower of a local city's king. Tepec's kingdom is in trouble because its protector-god, Quetzalcoatl (the Feathered Serpent), has fallen asleep and as a result great misfortunes happen to the kingdom; the corn crop is dying and a rival king makes a campaign to conquer Tepec's kingdom. So Tepec is assigned with the mission to go to the land of the dead, Xibalba, and awaken Quetzalcoatl to receive chulel, the divine blood which has life giving powers.

In Ireland, Ten is transformed into Felim, a monk living in an Irish monastery in the early centuries of Christianity. He discovers a living remain of an ancient Irish king and then begins interacting with a set of characters from an old myth which is written in a book in the monastery library. His final goal is to help the characters get to the end of the story.

In the Chinese chapter, Ten is in the body of a traveling Chinese civil servant who is stuck in a monastery because a ghost-shadow is blocking the entrance. As water supplies are running short, he decides to use the help of the Master of Directions to travel to a Chinese version of the land of the dead to consult an immortal excorcism master.

Shamballa, a mythic place, is the penultimate level, which acts as a final screen of protection between the home base and the Dark's prison. Queen Rhea, the same as in the first game, is waiting there to link the story between the two games and guide Ten to the final level of the game, which is no other than the submerged Atlantis.

Atlantis III: The New World (or Beyond Atlantis II) is the next game in the series. While "Atlantis" is in the title, the name is only mentioned as the origin of the Crystal Skull that the story revolves about. Aside from this and the existance of magic crystals, there is no connection to the other games.

In the year 2020, a young archaeologist tracks Egyptian ruins in a desert fast from Egypt, near a well. She joins forces with a local nomad who wants to kill the foreigners that refuse his people access to it, the leader of which is an archaeologist who has found a Crystal Skull that contains an important secret. When the main character manages to open a door the villain couldn't, he forces her to use the skull and find the secret for him.

The story turns to other people who have had contact with the Crystal Skull, specifically a prehistoric Siberian woman and a medieval Persian thief. The three of them obtain parts of the secret, and the main character learns a way to teleport herself and communicate telepathically. She is asked to share the secret with others as she sees fit.

After CryoInteractive went under, all seemed lost for the series. However, Atlantis Interactive Entertainment picked up the series and made a sequel, titled Atlantis Evolution.

Near the beginning of the 20th century, a 25-year-old journalist named Curtis Hewitt returns home from Patagonia. On his journey, he encounters a storm, which brings him to the world of Atlantis. Here he meets the native people and embarks on a quest to free them from their tyrannical gods.

The last game in the series, The Secrets of Atlantis: The Sacred Legacy, takes part in 1937. Howard Brooks, a young aeronautical engineer, returns from a conference in Germany. On board The Hindenburg zeppelin taking him to New York, Howard is attacked by members of an occult sect. When Howard wakes up, he finds himself alone. Eventually he meets a man claiming to have followed him for a long time, and that he and Howard are the last ones left on the zeppelin.

He soon learns that these cultists covet the mysterious secret of a forgotten civilization of which, it seems, he is the heir. Convinced that Howard has a key element of their research, they decide to set a trap for him. Caught up by his past, Howard sets out on an adventure that leads him, by turns, to several locations: Macao, an Indian palace, a temple in Mesopotamia, the Empire State Building in New York and, finally, the lost continent of Atlantis.

Not to be confused with Atlantis: The Lost Empire.

Tropes found in these games: