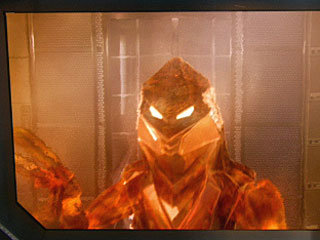 It's silicon-based, lives in molten lava, and makes ear-splitting dolphin-shrieks capable of piercing even the void of space. Not all alien races can be cute or sexy.
Zyzyx: Now, Grakkus there is none too quick on his feet. It's probably because he leads such a... sedimentary

Sometimes in science fiction, you'll find aliens whose bodies replace carbon with silicon. In hard science fiction, the plausibility of this trope rests on carbon and silicon being in the same family of elements: the ability to form four bonds opens the door to a vast array of potential complex nanostructures.

Silicon biochemistry would be wildly different though: you can't replace carbon with silicon in known biomolecules and get anything functional. Even the small "hydrosilicon" molecules are much more reactive than their carbon counterparts. Plus, carbon is actually not so common on the earth, with the SECOND most abundant element being... wait for it... silicon.

note  silicon dioxide is the most abundant compound on earth but as the name suggests, oxygen is at least twice as abundant as silicon. If that kind of life were able to form, it's reasonable to assume it would have done so here (as you know, it didn't).

It's somewhat more chemically plausible to base life on silicates (silicon oxides), which have a huge variety in nature. These species would either have to exist at molten-glass temperatures, or be very slow (literally geological). Silicate based lifeforms would definitely be more Starfish Aliens than Rubber-Forehead Aliens.

In the Media, Silicon-based aliens tend to come in one of three flavors:

Most of the examples below are not hard science fiction. Authors have a lot of fun with the possibilities. Sometimes other elements are used, which don't have to be in Group 4 of the periodic table.

For some reason, a siliconer is very likely to be a Starfish Alien, even if they're the sole example in a sea of Human Aliens and Rubber Foreheads, despite those tropes being equally implausible regardless of chemical composition.

Even when a setting has Loads and Loads of Races, there isn't likely to be more than one planet of Siliconers, their biochemistry likely being one of their defining characteristics.