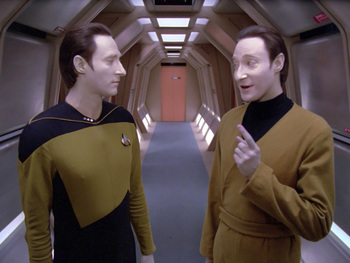 The Enterprise crew finds a disassembled android identical to Data at the site of the Omicron Theta colony—where Data was found—which was destroyed by a life form dubbed "the Crystalline Entity." The reassembled android, Lore, claims that Data was created first, and was considered the "less perfect" android. Lore is given a tour of the Enterprise, and later on he tricks Data into drinking something that immobilizes him. He then switches clothes with him, copies over his Facial Tic over to Data and erases his own, and pretends to be Data, claiming that "Lore" attacked him in his quarters. All this is for the purpose of offering the Enterprise to the Crystalline Entity, which he had been in contact with and invited to Omicron Theta in the first place, gaining its gratitude for all the life forms it consumed there.

Wesley Crusher is suspicious of "Data" (Lore), but is brushed off by the senior officers when he voices his concerns. He goes to Data's quarters and finds Data unconscious, and gets his mother, Dr. Crusher, to revive him.

The ship encounters the Crystalline Entity, and the ship's shields protect it from the feeding beam, but Lore has a plan to trick Picard into dropping the shields, offering to replicate a large tree and beam it out into space, then destroy it with phasers to demonstrate the Enterprise's power. He goes to the cargo bay and has a showdown with Data, who manages to get Lore onto a transporter pad so Wesley can beam Lore out. If beaming a tree into space and destroying it would result in dropping the shields enough for the entity to attack, then why doesn't beaming Lore into space have the same effect? This is never answered. Finally, Data is asked how he is handling the circumstances. Data says "I'm fine."