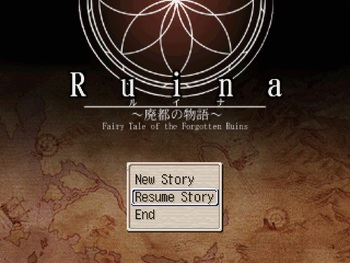 Ruina: Fairy Tale of the Forgotten Ruins is an RPG Maker 2000 game developed by Shoukichi Karekusa in 2008 and translated by Dinklations in 2021.
Advertisement:

The adventurers of Holm discover an ancient ruin just north of town, but soon after making some headway in their exploration, a horde of "Nightseed" demons attack the town. Although they fend off the monsters, several children are now falling prey to a disease that slowly encases them in a purple crystal. Worse yet, the Nightseed continue to attack the surrounding area, destroying nearby villages in the process. The cause of these attacks must be in the ruins, so it falls on the adventurers to continue their quest and solve the mystery of the Nightseed.