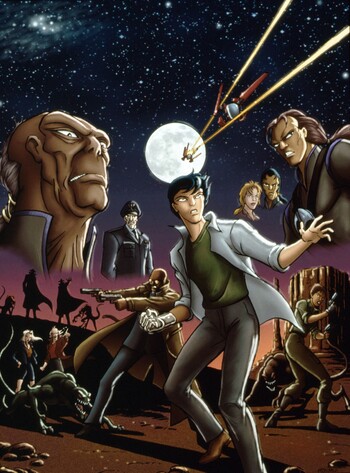 Produced by Steven Spielberg and DreamWorks, Invasion America was a prime-time animated TV drama, an animesque miniseries about aliens invading America. Invasion America was created primarily to cash in on the late-1990s paranormal craze that The X-Files created. It wasn't particularly popular with audiences, and aired only one season before ending inconclusively. It is notable for being one of the very few animated adult dramas produced in the United States (the only others, as of 2022, are Æon Flux, Todd McFarlane's Spawn, Spider-Man: The New Animated Series, and Primal). It wasn't initially planned as an adult series, however, having originally been intended for Kids' WB!.

The story of Invasion America begins in the early 1980s with Cale-Oosha, the ruler of Tyrus, looking into his uncle's project with Earth, believing it to be a plan to establish peaceful contact with humanity. However, his uncle, The Dragit, claims that their dying planet ought to invade Earth, conquer the bellicose humans and take hold of its resources. Cale refuses and a civil war breaks out.

Cale and his bodyguard/trainer/trusted friend Rafe escape to the Utah desert where Cale is rescued by Rita Carter, a human woman who guides the Tyrusians through human living and becomes a Love Interest for Cale. After a few years of hiding on Earth, Cale returns to Tyrus to lead the loyalist forces (the Ooshati) that have organized, leaving Rita and their young son, David, under Rafe's protection.

In the present day, when the Dragit finally finds the family, he is determined to kill them, and David Carter's teenage life is thrown into a devastating adventure of stopping the Dragit, losing and gaining friends, and finding out just who he is.