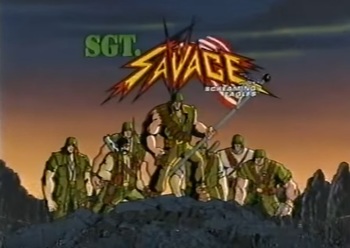 Sgt. Savage and his Screaming Eagles is a One-Episode Wonder from 1994, intended as an extension of the G.I. Joe franchise.

Its only 30-minute animated special titled "Old Soldiers Never Die" starring Robert Savage, a World War II soldier given superhuman abilities and awakened in modern times to fight alongside the Joes. Hawk puts Savage in charge of an undisciplined unit known as the "Screaming Eagles" that the Sergeant turns into an useful squad, but then Savage finds out that scientist Garret Stromm actually is his traitorous WWII second-in-command, Garrison "Blitz" Krieger.

A corresponding toyline (with figures in the 4.5" scale rather than the traditional 3.75" scale) was made by Hasbro, but very short-lived. Sgt. Savage was the last G.I Joe line to have the involvement of Kirk Bozigian, who had worked on the franchise since the inception of G.I. Joe: A Real American Hero in 1982.

After Sgt. Savage's cancellation, the Sarge himself was made a core character on G.I. Joe Extreme, and both its tie-in cartoon and comic had installments dealing with Savage's past with the IRON army. Additionally, some of the G.I. Joe's franchises' crossovers with Transformers have made reference to some of the concepts from Sgt. Savage, including certain characters featured in Revolutionaries, a part of the new Hasbro Comic Universe.

Sgt. Savage and His Screaming Tropes: