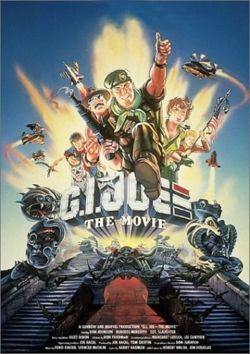 G.I. Joe: The Movie (1987) was the first film to come out of the G.I. Joe franchise. It is part of the continuity of the G.I. Joe: A Real American Hero cartoon, taking place after its second season. Originally planned as a theatrical release, but after My Little Pony: The Movie (1986) and The Transformers: The Movie bombed at the box office, it was released Direct to Video instead, and quickly added to the syndication package of the series (in both movie format and as a 5-part episode, the latter version featuring framing segments hosted by the live-action Sgt. Slaughter).

The film, much like its Transformers counterpart, expands on the story of the Joes-Cobra war, and the origin of Cobra is revealed to be tied in to a rather bizarre ancient civilization called "Cobra-La". Cobra-La's leader Golobulus has tired of Cobra Commander's constant failures and has decided to take matters into his own hands.

It also tried to avert some of the tropes associated with the TV series such as Never Say "Die" and Nobody Can Die. However, thanks to The Transformers: The Movie being released first and the negative backlash against Optimus Prime's death, the death of Duke had to be changed to a coma.

For the first live-action film in the franchise, see G.I. Joe: The Rise of Cobra.

Now has character page, which is a W.I.P.