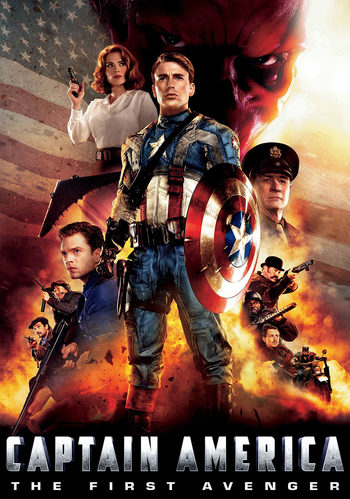 "Who's strong and brave, here to save
the American way?"
"You must promise me one thing: that you will stay who you are. Not a perfect soldier... but a good man."
— Dr. Abraham Erskine
Advertisement:

Captain America: The First Avenger is a 2011 action/adventure based on the Marvel Comics character Captain America, produced by Marvel Studios, and directed by Joe Johnston (The Rocketeer, Jurassic Park III); it is the fifth film in (and in some ways, a prequel to) the Marvel Cinematic Universe and its Phase 1. This film is not to be confused with the 1990 film Captain America, the two Captain America TV movies from the 1970s, or the classic movie serials from the 1940s, all of which have no relation to this film (aside from being based on the same comic book character). It is the first film in the Marvel Cinematic Universe chronologically. note If you discount the flashbacks to millennia ago in Thor

Taking place in the timeframe of 1942 to 1945, First Avenger tells the story of US Army reject Steve Rogers (Chris Evans), who volunteers for a secret government program which transforms him into the very epitome of human potential. As the Star-Spangled Soldier, Rogers goes to war against Nazi Germany's military forces — including Johann Schmidt (Hugo Weaving), who has his own plans for world domination.

Like Thor, The First Avenger serves as a proper introduction to Captain America in preparation for The Avengers. The original run of the film even included a trailer for The Avengers after the credits.

Steve is next seen in The Avengers, released on May 4th, 2012. An official sequel to The First Avenger was released in theaters April 4th, 2014, titled Captain America: The Winter Soldier. A spin-off TV show was also released on January 6th, 2015, titled Agent Carter, revolving around Peggy Carter's adventures in the 1940's set after the events of this film. A second sequel, Captain America: Civil War, was released on May 6th, 2016. A third sequel, focusing on Steve's successor following the events of The Falcon and the Winter Soldier, is in development. An alternate take on the plot of this film is the focus of the debut episode of What If...?, showing what would happen if it was Peggy who took the super-serum instead of Steve.

Example of:
On Patrol Montage