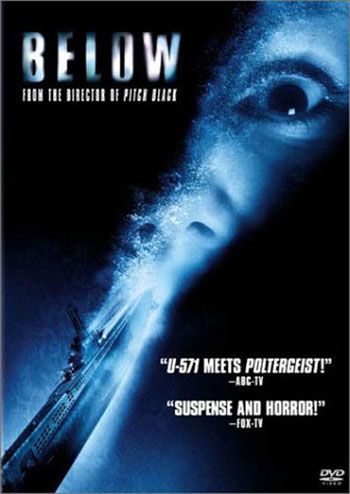 It's August 1943 and the USS Tiger Shark, operating in the Atlantic ocean right after the biggest U-Boat operation in the war, is asked by a recon Catalina seaplane to pick up three survivors (a nurse and two patients) of a British hospital ship sunk by German submarine. But for some reason morale aboard the sub is low and it's going to go even lower as strange accidents start conspiring against the ship's continuing survival. May be something worse than mere bad luck... Maybe even a malediction is at work.

Below is a Psychological Horror movie with a cast of very familiar faces but not a single star, directed by David Twohy and written by Lucas Sussman and Darren Aronofsky in 2002.

No relation to either the fantasy novel by Lee Gaiteri, or the 2018 Roguelike BELOW.