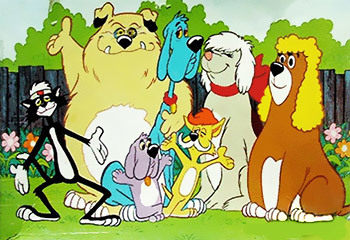 "Cats and dogs living together? Is that a sign of the incoming End of Times?"
Advertisement:

More than just a Token Minority, this sort of character has been written into a series specifically because the minority group is associated with a group that the country is at war with (to various degrees of hotness or coldness).

Usually, there are two reasons to include such a character: either as a way for the writer to use the enemy in the series without stereotyping all members of the group as enemies, or as a way for the writer to express his opposition to the war or its excesses. As such it's rare before the 1960s. It can be strange if minorities of other types are conspicuously missing—if the only Asian on your World War II super-team is Japanese, it's pretty obvious what's going on.

Alternatively, works set in the future will use a current enemy as an ally as a way of pointing up how futuristic they are being. ("A Russian serving with an American? Now I know we're in the future!")

In Spy Fiction, this makes a lot of sense; operatives with a background in the enemy's culture can go undercover much more easily. Questions will almost certainly arise about whether this character is a Double Agent.

The character often remains stereotypical in ways other than being an enemy. If this is done with in-universe conflicts instead of real life ones, that's Token Heroic Orc.