Film / Advance to the Rear 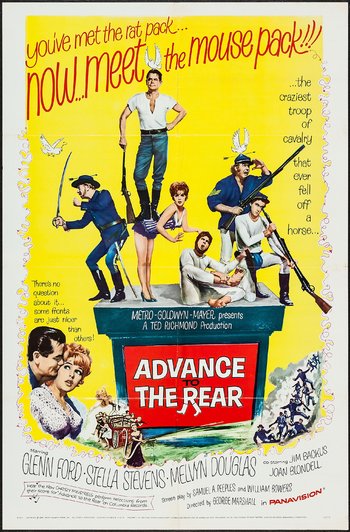 As the American Civil War rages on, General Claude Brackenbury (Douglas) and Captain Jared Heath (Ford) find themselves Reassigned to Antarctica after a misunderstanding where they accidentally caused an entire division to retreat. The Confederate army becomes convinced that they are on some mission of great importance and dispatch lovely Martha Lou Williams (Stella Stevens) to spy on them in the guise of a prostitute, accompanied by madam Easy Jenny (Joan Blondell). Brackenbury falls for her wiles, while Heath becomes suspicious of her. The two men and their subordinates suddenly find an opportunity for redemption after being assigned to guard a major gold shipment, while Martha tries to steal it for the Confederacy, and the Hired Guns working with her have plans of their own...