Film / The Wind That Shakes the Barley 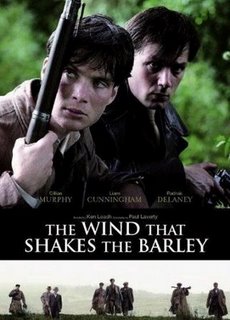 A historical Irish film set in early 20th century Cork starring Cillian Murphy, Liam Cunningham and Pádraic Delaney, and directed by Ken Loach. The film opens in 1920. Ireland is struggling to find its way out of the British Empire and become an independent nation. All over the country Irish men and women are uniting to resist the ruthless "Black and Tan" squads who have been sent to quell any thought of full-scale rebellion. Among those making a stand are Damien and Teddy O'Donovan, two brothers who, driven by love for their country, join the IRA in the hopes of driving the British out of their country.

The violent guerrilla tactics of the IRA eventually drive the British to the breaking point and a truce is declared, but when negotiations for peace between Ireland and Britain produce less than a full and united Irish Republic, the country is plunged into civil war, causing families who had fought side by side for a free Ireland to turn against one another as enemies.

The film won the Palme d'Or in 2006, and despite a number of attacks due to its "controversial" content, was critically acclaimed. It was also praised for its historical accuracy, particularly in comparison with other films set around the same time period, such as Michael Collins.

The cover art you see is now featured on an Irish stamp.

Tropes evident in The Wind that Shakes the Barley include: