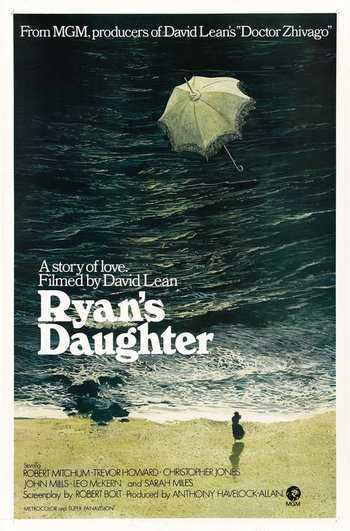 Father Collins: Have you got nothing to do?
Rosy Ryan: Precisely that!
Father Collins: Well, Ms. Precisely, that's a pity! Unemployment is a dangerous occupation!
Advertisement:

The setting is Kirrary, a fictional village on Ireland's Dingle Peninsula, in 1917, one year after the Easter Rising. One day, Rosy Ryan (Miles), the daughter of pub owner Tom Ryan (McKern), meets and falls for local schoolmaster Charles Shaughnessy (Mitchum). The two marry, but not even her marriage satisfies Rosy's high spirits. When she meets Major Randolph Doryan (Jones), a Shell-Shocked Veteran from the trenches who's arrived to take command of the local army base, she falls for him and the two begin a love affair. This causes problems when some Irish revolutionaries arrive in town to acquire a shipment of arms.