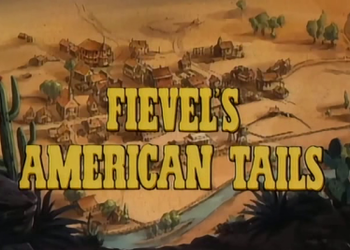 Fievel's American Tails was a short-lived animated cartoon series, based on An American Tail: Fievel Goes West, that ran for 13 episodes in 1992 on CBS. It was produced by Steven Spielberg's Amblimation animation studio, Nelvana, and Universal Cartoon Studios. It aired for one season, and continued Fievel's adventures living in the sleepy town of Green River in the American West.

In the show, Cat R. Waul has returned to Green River to carry out more evil schemes, and like the film, Fievel is usually the only one who sees through them. Other villains Fievel must contend with include Sweet William's cat gang (former members of Waul's gang that have splintered off on their own) and some one-off villains. Also included are a few Slice of Life episodes centered around Fievel's relationship with his family. Phillip Glasser, Cathy Cavadini and Dom De Luise reprise their roles as Fievel, Tanya and Tiger respectively.

In 1993 and 1994, MCA/Universal Home Video released all the episodes (save for "Little Mouse on the Prairie") on six VHS tapes and eight on two Laserdisc volumes. Prior to the series being added to Peacock in 2020, these were the only releases the show had in the United States. In the United Kingdom, the 13-episode series was released on six videocassettes in 1995, which enabled the full series to surface on the internet in English a decade or so later. Episodes have been released on DVD in France, Germany, and Italy. Universal currently has no plans to release the show on DVD in the United States. At the end of each episode, Fievel, who was the national "spokesmouse" for the Reading Is Fundamental Foundation, did a "Reading Buddy" spot to encourage children to read. These public service announcements were not preserved on the VHS releases and may be considered lost, only existing through surviving TV recordings.

On July 15, 2020, episodes were made available on NBC/Universal's new streaming service, Peacock.