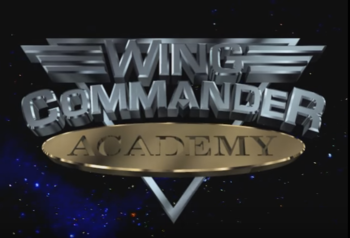 Wing Commander Academy was an American animated series produced by Universal Cartoon Studios in 1996 as part of the USA Network's Saturday Morning Cartoon lineup. Based on the Wing Commander series of video games, it featured several of the games' characters, most of them played by the actors who portrayed them in the later games (including Mark Hamill and Malcolm McDowell), and filling in backstory on The Kilrathi and Admiral Tolwyn. The plot centers around a group of cadets going on their final cruise before graduating from the Military Academy.

Character info can be found on the general Wing Commander universe sheet.

Tropes employed by the cartoon: