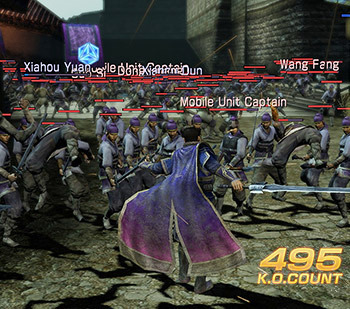 Come on boys! He must be getting tired after effortlessly killing the first 495 of us!
"And people actually voluntarily attack you? Are they just stupid?"
— Sergeant Kylon, Dragon Age: Origins
Advertisement:

In video games, the difference in power between different characters can usually be accurately gauged by comparing their physical and skill statistics and the qualities of their equipment. Even so, computer-controlled antagonists will usually be unable to size up the protagonists and determine that the latter are at a massive advantage. Even though there is nothing compelling them to attack, they will usually express their belief in their own superiority, attack, and promptly get slaughtered.

Sometimes, as a result of non-linear gameplay; a group of enemies that would have been a good match for you when you were at low level, missing half your party, and couldn't use magic without being arrested; has exactly the same scripted response as when you're able to hunt demigods for sport, walk around with your own private army, and are armed to the teeth with glowing magitek. Other times, there's simply no explaining why the enemy mooks just don't flee before the One-Man Army, the character who's on a New Game+, or the epic-level character party other than them being that stupid.

This can be considered an Acceptable Break from Reality in many games that are primarily about fighting — slaughtering the enemy's legions of doom is far more satisfying for the player than killing one or two guys and having the others run and escape. It also allows the player to avert being a Designated Hero: after all, if the enemy troops keep trying to kill the Player Character after he shows how powerful he is, he's perfectly justified in taking all of them down.

Some games do try to avert this by having lower-level enemies run away after a round or two. This may be justified in a story as a case of Mugging the Monster if the protagonist doesn't seem formidable because they are Weak, but Skilled or are a Pintsized Powerhouse in a setting where Muscles Are Meaningless. May be due to Spiteful A.I.. See also Leeroy Jenkins and Artificial Stupidity.

NOTE: This trope deals exclusively with video game situations where the computer is clearly outmatched but is unable to do anything but mindlessly attack; a number of perfectly good tropes, such as Attack! Attack! Attack! and Bullying a Dragon, exist for characters in other media who perform acts like this.