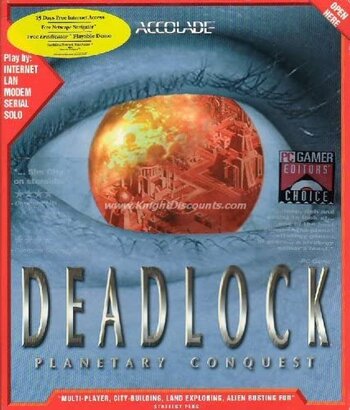 Gallius IV, the pearl of the galaxy! With a great climate and loads of resources, it's a shoo-in for colonization. You lead your merry band of pioneers to this pristine new world, ready to expand and enrich your nation. Unfortunately, it looks like every other race in the galaxy had the same idea, and sent their own people to stake a claim to it.

Released in 1996, Deadlock is a turn-based strategy game with a few city building elements thrown in for good measure. The planetary map is divvied up in to different provinces (a la Risk), on which you can build colonies. The colony screen is akin to SimCity, letting you tailor each colony to support population, grow food, mine ore, raise morale, and the like. When your units meet the units of a hostile faction, combat happens. This is controlled by the computer, though you can tip the odds in your favor by researching technologies to improve your units. Troops that survive multiple battles also gain toughness points.

A fairly simple game, it stood out by virtue of the creative art design. Each of the seven races has a distinct look that can be seen in the residences and cultural centers of their colonies. Originally, the look of units was intended to reflect the race that built them, but this was scrapped in favor of generic units (though the infantry still has species-specific appearances). It also took a tongue-in-cheek approach to the setting, with the voice-acted colony advisors either showering you with praise or snark, depending on your performance.

Deadlock was followed by a sequel called Deadlock 2: Shrine Wars.