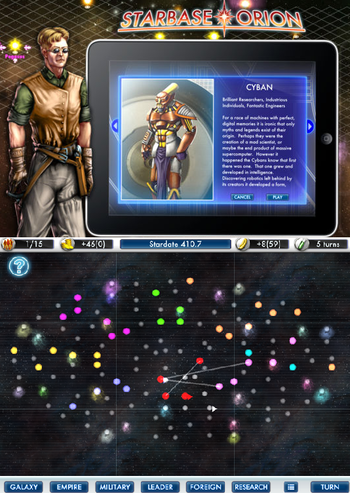 Starbase Orion is a Turn-Based Strategy for iOS developed by Chimera Software, LLC, and first released in 2011. Originally advertised as a port of Master of Orion, the game has since evolved. One marked difference from the get-go is the focus of gameplay and any enhancements on multiplayer. Like MoO, the player takes control of a starfaring race (Cyban, Draske, human, Isather, Vass), colonize and improve worlds, research new technologies, design and build ships, conquer enemy worlds, engage in diplomacy and espionage, etc. The initial release of the game did not include some of these features, but they were added in subsequent updates.
Advertisement:

By far, the largest difference between Master of Orion and Starbase Orion is tactical combat. Tactical battles in Starbase Orion are, basically, real-time simulations. When two or more hostile fleets meet at a star system, the players set battle behavior for each ship or ship type. Behavior includes maneuvering (close to short-range, maintain medium range, maintain long range, stay close, evade, retreat), targeting (largest, smallest, weakest), primary target and primary escort. Beyond that, players have no effect on the battle, the results of which are displayed at the start of the next turn. Already knowing the final result, the players may watch the battle simulation. A battle may last more than one turn if not all ships of either side have been destroyed or if reinforcements have arrived. All non-missile weapons always hit (unless the target ship is either commanded by Eesathu or has Auxiliary Thrusters), so firepower is usually the deciding factor. This was likely done to speed up multiplayer games, as turn-based tactical combat between large fleets can take a long time.

Planetary improvements are done in the style of Master of Orion II, although each planet has a limited number of building slots (depending on planet size). Each improvement requires a different number of slots. Most require 1. One requires 2. Orbital structures require 0. Unlike MoO, only one starbase may be built per system, and it protects the whole system. Certain structures are improved versions of existing ones and do not take up extra space (e.g. Trade Port II replaces Trade Port I). The number of slots may be increased after researching and building certain improvements.

Research is divided into three categories: astrophysics, civic, and military. However, it's not always clear how they are subdivided, as starbases are placed in the astrophysics category despite being military structures. Each technology has a colored indicator by it, showing how many technologies can be researched in this category before it disappears. Red means that, if the player chooses to research a different technology from this category, this one will be lost, although it may re-appear later. Yellow means you are 2 technologies away. Green means 3.

Ship types are identical to Master of Orion II, except Doomstars are called Mammoths. As before, Titans and Mammoths need to be researched. However, Battleships need to be researched as well. Freighters are not built separately, but extra food is automatically transported between non-blockaded colonies at a cost. Extra food that is not used is sold for profit. Instead of size, each ship type has a certain number of weapon slots and a certain number of equipment slots. The number can be increased through research. For example, Frigates can initially fit only one weapon and two pieces of equipment, but can be increased to three weapons and four pieces of equipment. Equipment can be faster engines, larger fuel tank, thicker armor, shield generators, etc. Refitting ships is not possible, but existing ships can be scrapped either for cash or to speed up production on a colony in the same system. Thus, players can imagine that a scrapped cruiser whose resources are applied to the production of a new cruiser is actually being refitted. Since ships don't gain experience in Starbase Orion, there is really no benefit to keeping existing ships versus brand-new ones.

There are only six types of weapons, although each type of weapon has three stages of improvement unlocked through research which increase damage and reduce cost. Lasers are, usually, the earliest to be researched: weak damage decreased with distance, cheap building cost, double damage against shields but half against structure. Gauss turrets are close-range weapons that completely ignore armor but are terrible against shields. Plasma turrets are for extremely long-range fights (i.e. damage increases with range) and are more effective against shields, but are fairly weak and have a reduced effect on armor. Nuclear missiles have long range but fire once every three battle turns and do less damage to shields and armor but have a bonus against structure; damage is not reduced by range. Photon torpedoes also fire once per three turns and are less effective against armor, but travel faster, do significantly more damage, especially against shields, and are more resistant to point-defense. Missiles and torpedoes can be countered with point-defense and ECM systems. Ion pulse cannons are late-game weapons that are more effective against structure than shields or armor; however, the weapon does more damage to structure if the enemy has shields by overloading the shields. Unlike other weapon types, ion pulse cannons can only be mounted on battleships, titans, mammoths, and starbases.

Military and colony leaders can be hired at auctions. Auctions last for several turns but can be extended due to fierce bidding. A player is initially limited to 1 leader total, although that number can be increased to 3 and 5 with research. Upon reaching the limit, the player may not even place a bid on any new leader. Leaders are pretty unique in their effects on planets, ships, fleets, or the whole empire. The "per turn" cost of supporting a leader is proportional to the final hiring price. Leaders do not gain experience. "Killed" leaders reappear at the auction in a turn or two. See the character page for information on the races and leaders.

Unlike Master of Orion II, fleets underway may not be redirected. The only exception is for a race that hires the colony leader Morph, although that feature is known to be buggy (which is Hand Waved as a side effect of an interrupted warp jump).

In 2013, an attempt was made by Chimera to raise funds via Kickstarter

to port the game to Android, PC, and Mac, but the project fell far short of the goal and was scrapped. There are mentions of a sequel in development, but no details have been revealed.