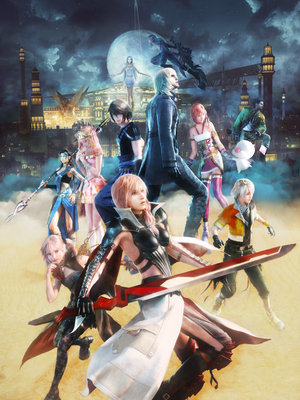 At the end of Final Fantasy XIII-2, Time itself was destroyed and took the world as we knew with it. Lightning, having failed her mission as Etro's champion, placed herself into crystal stasis to survive the Time Crash and preserve the memory of her fallen sister, Serah. Five hundred years later, she awakens into Nova Chrysalia, a new world composed of four connected islands floating in the Sea of Chaos, and humanity's last bastion. However, she soon discovers that this world has a mere thirteen days left before it is consumed and reborn as a new world, and Lightning must strive to ensure that the new future is a bright one.

The main feature of the game is the Doomsday Clock, which counts down the minutes until Nova Chrysalia is destroyed. By defeating monsters, completing missions, and making new discoveries, Lightning can obtain Eradia so she can extend the lifespan of Nova Chrysalia, putting more time on the clock so it can end when it's supposed to, as well as increase her base stats — HP, Strength, Magic, Max ATB, Item Slots and EP (which are expended on such useful moves as stopping time). If you're wondering, this gameplay mechanic has already been done before by Square; bonus points for Lightning being a Valkyrie.

The game features a day-night system, an equipment system that affects Lightning's appearance (seemingly a combined form of XIII and XIII-2's equipment system with X-2's outfits and costumes), a real-time version of Command Synergy Battle (XIII and XIII-2's variant of the Active Time Battle system) with seamless integration and free movement complete with timed hits, and Lightning as the sole playable character for the duration of the entire game.

A novel taking place after the ending, known as Final Fantasy XIII: Reminiscence -tracer of memories-, was released in June 2014.

If this description did not spoil you already, You Have Been Warned.