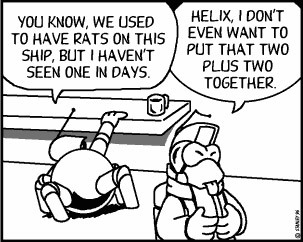 Do NOT ask for the sausage inna bun.
Lenina Huxley: Just don't ask them where the meat comes from.
John Spartan: Huxley, what's that supposed to mean?
Lenina Huxley: Do you see any cows around here, detective?
— Demolition Man
Advertisement:

There are few better ways (short of No Party Like a Donner Party) to demonstrate that a human character is desperate for food than to reduce him to eating rats. Although such animals are technically edible, their association with disease, garbage, and urban decay places them firmly on the "Unclean/Do Not Eat" list in most viewers' minds. This also applies to mice, cockroaches, dump-foraging seagulls, urban feral pigeons, mangy strays and other scrounging pests, although their small size makes some of these creatures unlikely candidates for Meal of Last Resort — although, again, the fact that people are going after such tiny morsels for food can also serve to highlight how desperate they've become.

Commonly seen in After the End scenarios or during prolonged military sieges. Also Played for Laughs in cases where characters are simply too poor to afford even dog food.

Eat That applies if the eating is done to win a bet or game show rather than survive. May be inverted when a Squeaking Carpet or Rodents of Unusual Size are involved. Usually an alternative to Eat the Dog, another way to showcase characters' famished need to eat whatever they can get... although if it's a pet rat that gets eaten, the two can overlap.

It should be noted that rat is a delicacy in some countries (see Real Life, below), which is potentially a different trope altogether.

Sister trope to I Ate WHAT?!, in which disgusting things that aren't even nominally food are eaten. Subtrope to both Poverty Food and Too Desperate to Be Picky.