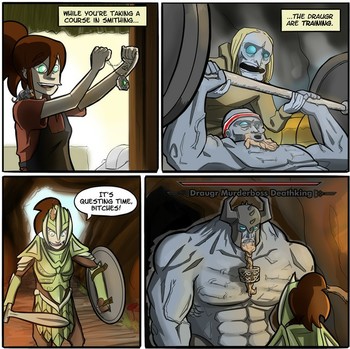 Should have been studying the blade.
Advertisement:

A specific form of Anti-Grinding, usually seen in RPGs and Roguelikes, though it could potentially be used in any game with Character Levels. Level Scaling is where the world (or specific areas) levels up with you to provide a constant challenge, primarily by upping your foes' stats.

There are three kinds of foe level scaling systems that are commonly used. One is where enemies simply have their stats and/or equipment improved. Another is a system where the number of enemies are increased. The third is a system where weaker enemies are replaced by different, stronger ones. Taking an encounter with a 25 hitpoint wolf in its den as an example - In the first system, the same wolf may have 100 hitpoints at a later level. In the second system, an entire pack of wolves will be encountered at higher levels. In the third system, the wolf will be replaced by a dire wolf or a bear after a certain level is reached. There may also be a combination of the three, so you may encounter wolves that progressively get stronger and increase in number, up until a certain point, where they'll be joined by dire wolves (with dire wolves growing more common at higher levels) or replaced by bears who also progressively get stronger as you level up. Most games employing level scaling also make use of a level cap for certain enemies and/or certain areas, so the cellar in the first tavern you enter isn't going to filled with level 100 rats when you return later.

When done well, it does exactly as intended, providing a constant challenge that keeps the game fun, and will keep itself largely unobtrusive. Otherwise, it can head straight into Empty Levels and cause situations where leveling your character can actually make the game more difficult, such as by having things like regular enemies outleveling friendly NPCs in the game, making things like escort and defense missions a lot more difficult at higher levels. Underleveling (purposefully keeping yourself or your party at a low level) can become a viable tactic (and, under certain circumstances, a Gamebreaker) if this trope is in effect. It can also lead to, (usually) unintentional cases of Improbable Power Discrepancy, depending on when a player first enters an area.

This is becoming more common in RPGs, especially sandbox-style RPGs, as it makes it easier to keep the player challenged, while limiting the need for predicting the level the player will be at when they reach a certain point.

Compare Kill One, Others Get Stronger, where killing foes makes others stronger. Contrast Sorting Algorithm of Evil, where the enemies get tougher as you go along, regardless of your own level. Also contrast Beef Gate, which relies on an aversion of this trope.