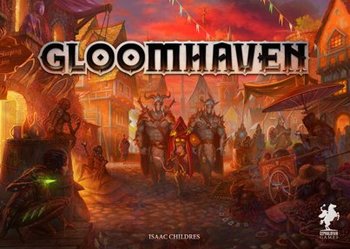 The Dark Souls of board games.
Advertisement:

Gloomhaven is an enormous tabletop game developed by Cephalofair Games. Up to four players pick from the six starting classes to play cooperatively as mercenaries working in town to complete jobs, get treasure, and pursue personal quests assigned at character creation. As players progress they will gradually make the town of Gloomhaven prosper, while unlocking new scenarios, items, class abilities, and classes. The game features branching narratives, a persistent, changing world, and many secrets to unlock.

In a way, Gloomhaven could compared to a standalone Tabletop RPG campaign. Each player creates a character of a chosen class, chooses a backstory and agenda for it, and joins to a shared party - to enter some dungeons, kill some monsters, and steal their loot. The overwhelming majority of the game is Turn-Based Strategy card game taking place during while Dungeon Crawling, with miniatures on a board, hexes and all. Players enter the dungeon with a hand of cards they get to choose from their classes unique pool, with each card split into a top and bottom half. Each round a player will play two cards and perform the top action of one card and the bottom action of the other, trying to complete the Scenario's objectives before everyone is killed or runs out of cards. All players choose their cards in secret, reveal them simultaneously, and then act them out in an order of Initiative on the cards they've chosen, with the monsters actions and initiatives being determined by a combination of AI-guided rules and randomly drawn monster-specific cards. No dice are used, instead the attack values written on the cards are modified by an attack modifier deck full of various positive and negative effects that players can improve as they progress and level up. Each encounter will be set up based on the party level and number of players, since each group will be encountering scenarios at different points in time based on their decisions.

The true value of the game, though, lies in an enormous amount of Unlockable Content it provides - and not just opening new scenarios for you to complete, new monsters to defeat, or new gear to purchase, of which there is already plenty. The box contains a large number of sealed containers, which can only be opened on certain circumstances during the play through, usually on finishing some particular quest. For example, of 17 playable characters, 11 of them are hidden from players, and the only clue you have is a symbol on the box until the moment you actually open it. Unboxing these hard-earned items and adding them to the game is what makes playing Gloomhaven a truly rewarding experience.

An expansion titled "Forgotten Circles" was released in 2019, adding a new class (the Diviner), new enemies, and around 20 scenarios to the game world, serving as the conclusion to the game's main story.

A standalone expansion titled "Jaws of the Lion" was released in July 2020. It features four new classes and 25 scenarios, plus a handful of new items and enemies. It was intended to be an easier introduction for players new to Gloomhaven, including a considerably more robust set of tutorial scenarios, which it recommends veterans skip, and a much more streamlined campaign progression. The game is a standalone experience, but the new characters and items can integrate with the original games content if desired (or vise versa), and the plot of the story serves as a loose prequel, however, prior knowledge of Gloomhaven's plot is not required.

A sequel, entitled Frosthaven, was announced in December of 2019 and a Kickstarter Campaign was launched in March 2020. The campaign successfully concluded raising over $12 million (over it's initial goal of $500,000), and is set for a late 2021 delivery date.

Source Point Press published Gloomhaven: Fallen Lion comic book in 2020 and Gloomhaven: A Hole in the Wall for the 2021 Free Comic Book Day.

In 2019 a digital adaptation of the original Gloomhaven released in Early access. As of October 2021 the game includes all content from the original game, including the full campaign, online multiplayer, and an alternate "Guildmaster" mode, a more loosely structured campaign compared to the original, mostly using semi-random scenarios and featuring a unique story for each class.